The shareholding of Talanx AG in Hannover Re was unchanged at 50.2%. The breakdown of the free float similarly remained virtually unchanged year-on-year. The stake held by private investors increased marginally by 0.5 percentage points to 8.3%, while the proportion in the hands of institutional investors decreased to 41.5%.

Based on the entries in the company’s share register as at the end of the financial year, there were significant shifts within our free float away from foreign investors, particularly in the United States and Benelux countries, in favour of German shareholders: the proportionate holding in the United States fell by an appreciable 8.1 percentage points to 13.4%, while holdings in the United Kingdom and Benelux countries decreased by 1.0 percentage points and 2.5 percentage points to 15.4% and 7.5% respectively. The proportionate holdings in Switzerland, France and Asia similarly declined, albeit only marginally. The total shareholding in Germany, on the other hand, rose from 44.2% to 57.6%. 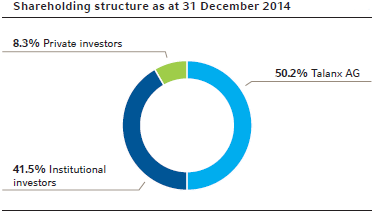 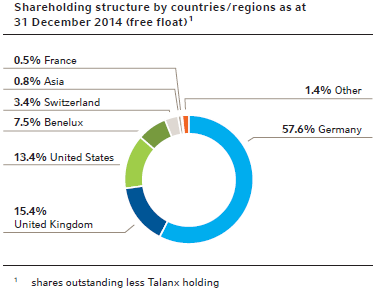 Topic related links outside the report: