Our portfolio of assets under own management grew considerably more strongly than expected in the course of 2014; it closed significantly higher than the previous year’s level at EUR 36.2 billion (EUR 31.9 billion). This was based in part on a rise in the valuation reserves against the backdrop of the observed yield declines on government bonds in our main currency areas. Above all, though, the weakness of the euro against the major investment currencies substantially accentuated this effect; the cash flow was once again gratifyingly positive.

Compared to the previous year, we kept the allocation of our assets to the individual classes of securities largely unchanged. We merely moved to further slightly increase the share attributable to real estate as part of the strategic expansion of this asset category and scaled back the proportion of covered bonds in favour of corporate bonds. In all other classes we made only minimal changes in the context of regular portfolio maintenance.

The portfolio of fixed-income securities excluding short-term assets rose to EUR 32.0 billion (EUR 28.3 billion). Hidden reserves for available-for-sale fixed-income securities recognised in shareholders’ equity totalled EUR 1,246.4 million (EUR 426.4 million). This reflects the yield decreases observed in the course of the reporting period, especially in the area of government bonds in our main currency areas. As to the quality of the bonds – measured in terms of rating categories –, the proportion of securities rated “A” or better remained on a consistently high level as at year-end at 82.9% (83.0%). 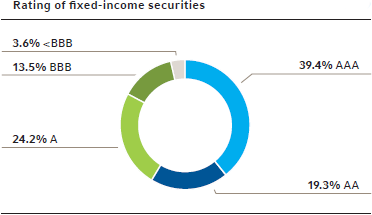 We were again able to increase our real estate allocation somewhat in the course of the year. Various properties in Germany and Central / Eastern Europe were acquired for this purpose; further projects are under review, and the real estate allocation will therefore keep rising steadily as planned. Despite selective sales in the course of the reporting period, it currently stands at 3.9% (3.6%).

At the end of the year under review we held a total amount of EUR 1.3 billion (EUR 1.2 billion) in short-term investments and cash. Funds withheld amounted to EUR 15.9 billion (EUR 14.3 billion).

Back to: Investment policy
Continue reading: Analysis of the capital structure

Topic related links within the report: