Regulatory developments: Solvency II is a reform of insurance supervision law in Europe, the implementation of which on 1. January 2016 poses enormous challenges for the entire (re) insurance industry. Along with redefining capital requirements, Solvency II places additional demands on companies’ internal management systems and on the information to be disclosed by undertakings to the regulator and the public at large. Further more specific aspects of Solvency II were defined in 2014, and among other things there is a new draft of the delegated act. Hannover Re has been progressively implementing the new requirements in recent years. Our internal target capitalisation with a confindence level of 99,97 % comfortably exceeds the target level of 99,5 % under Solvency II. The core functions of Solvency II – the risk management function, the actuarial function, the compliance function and the internal audit function – have been implemented along existing processes and organisational structures at Hannover Re. Additional staff had to be taken on and extra systems deployed as part of the launch phase, first and foremost in order to be able to meet internal and external reporting requirements.

Parallel to the regulatory developments in Europe, we are seeing adjustments worldwide to the regulation of (re)insurance undertakings. It is often the case that various local supervisory authorities take their lead from the principles of Solvency II or the requirements set out by the International Association of Insurance Supervisors (IAIS).

Above and beyond this, further capital requirements for large, internationally operating (re)insurance groups are to be anticipated in the future. These requirements are under development by the IAIS and the Financial Stability Board (FSB). 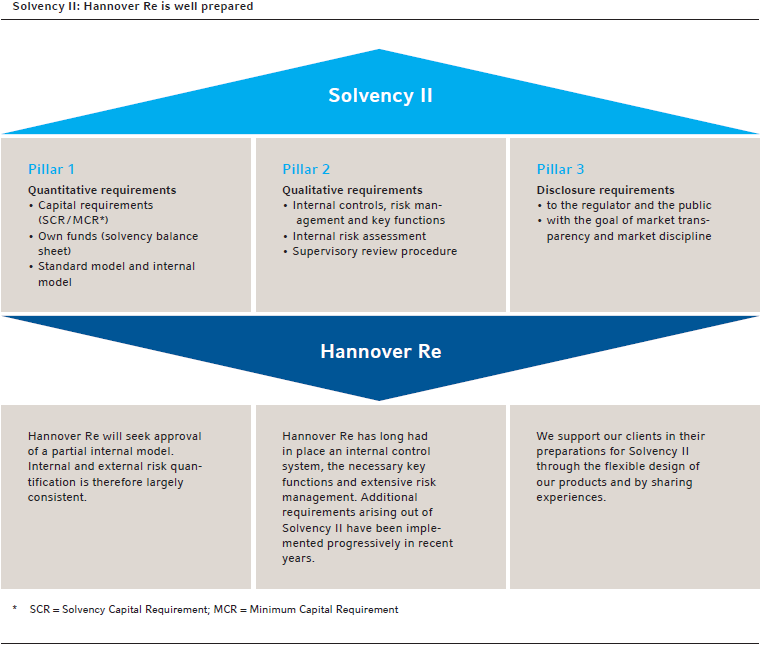 Capital market environment: Another major external influencing factor is the protracted low level of interest rates, especially with an eye to the return on our investments. For further information please see the “Investments” section of the management report.

Topic related links within the report:

Topic related links outside the report: